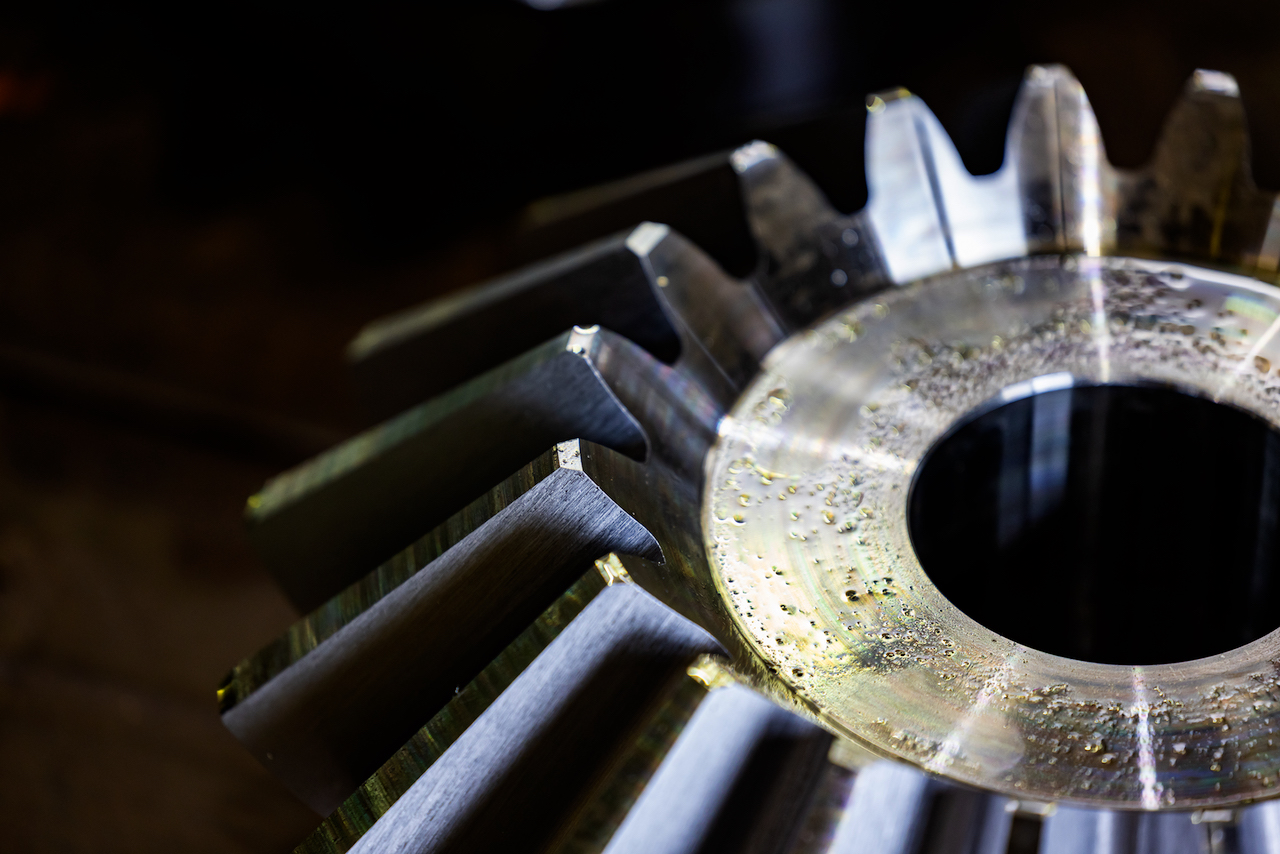 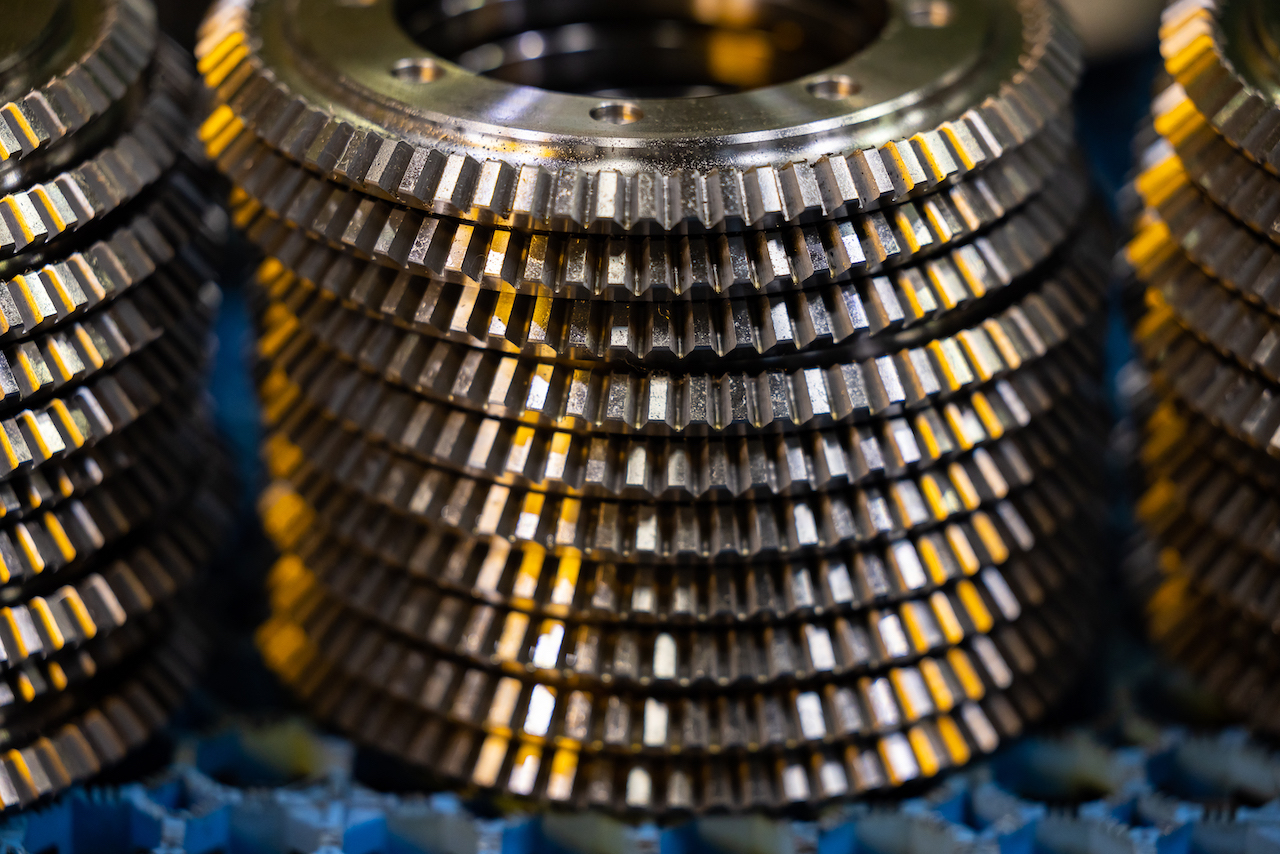 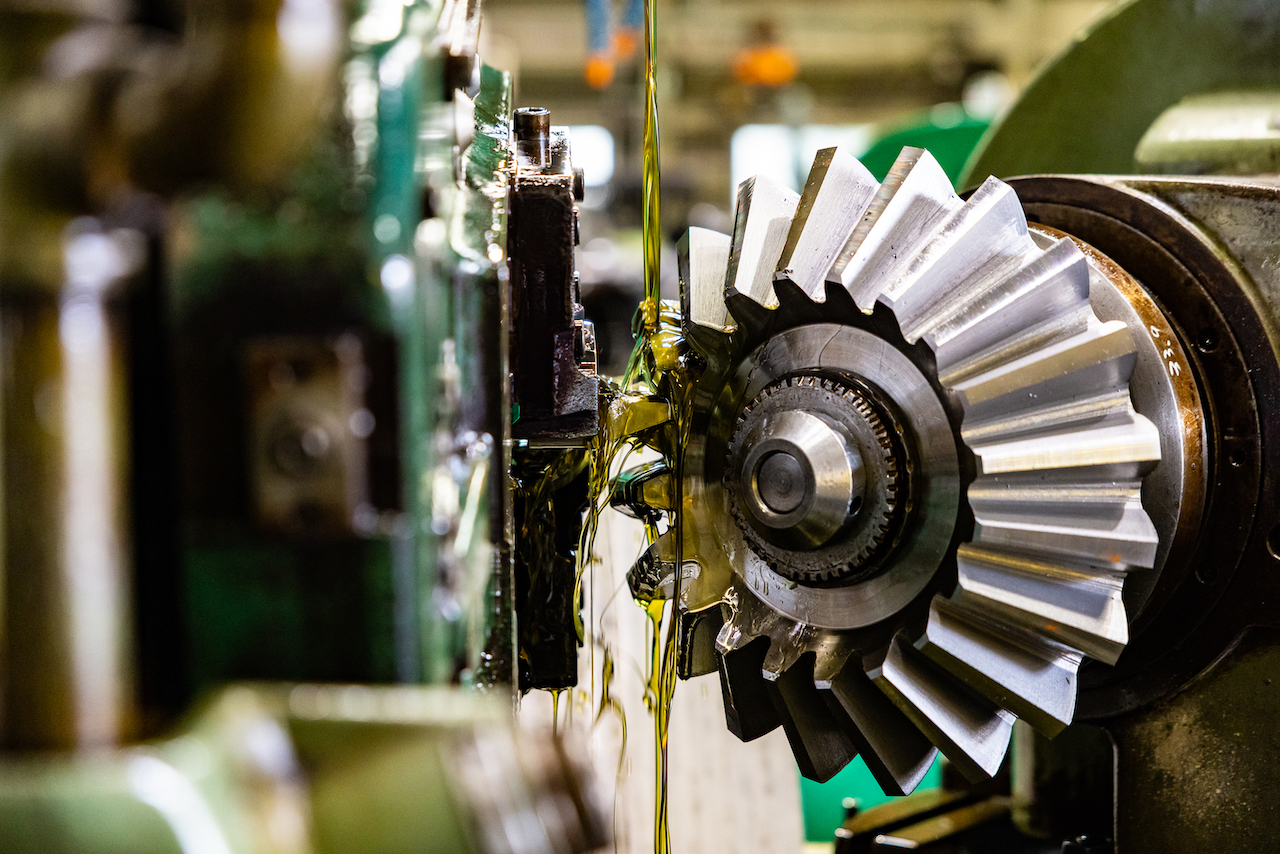 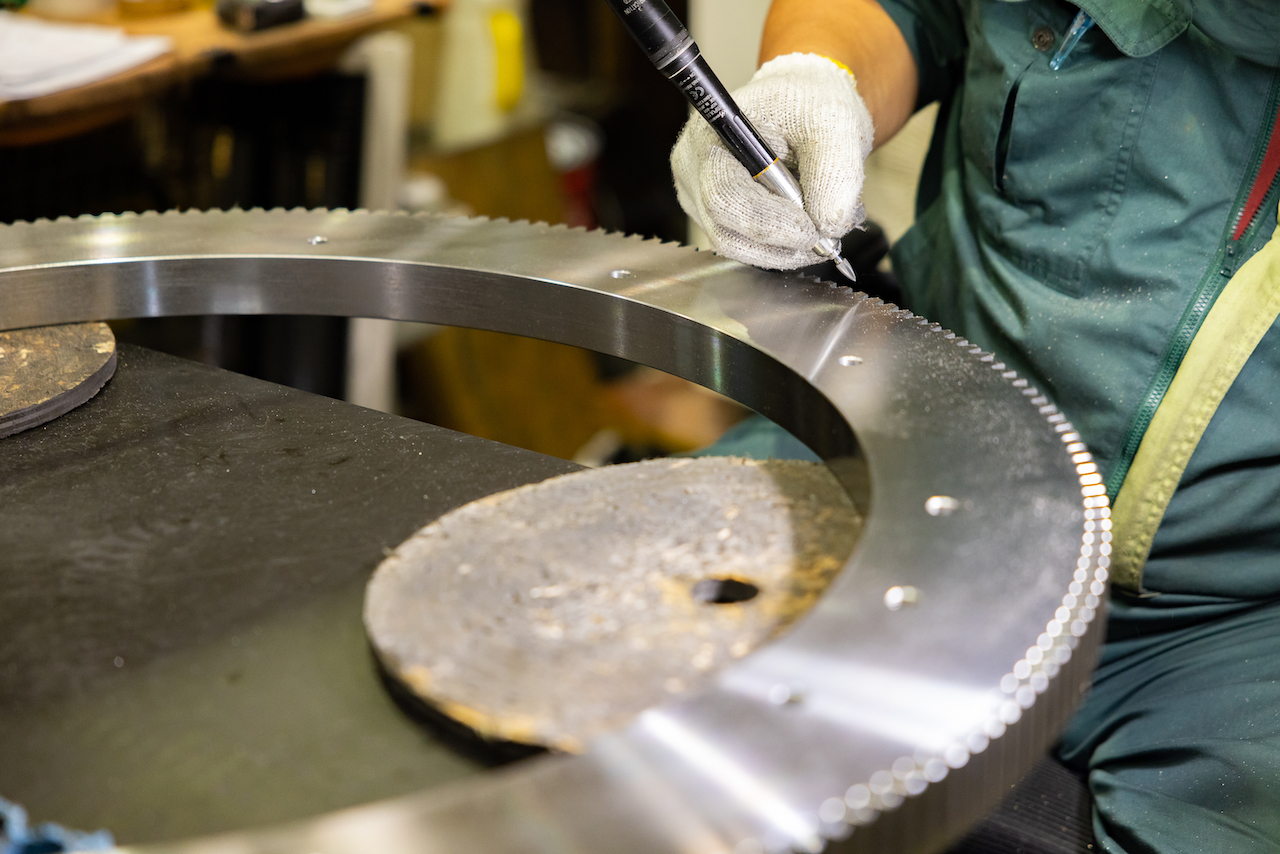 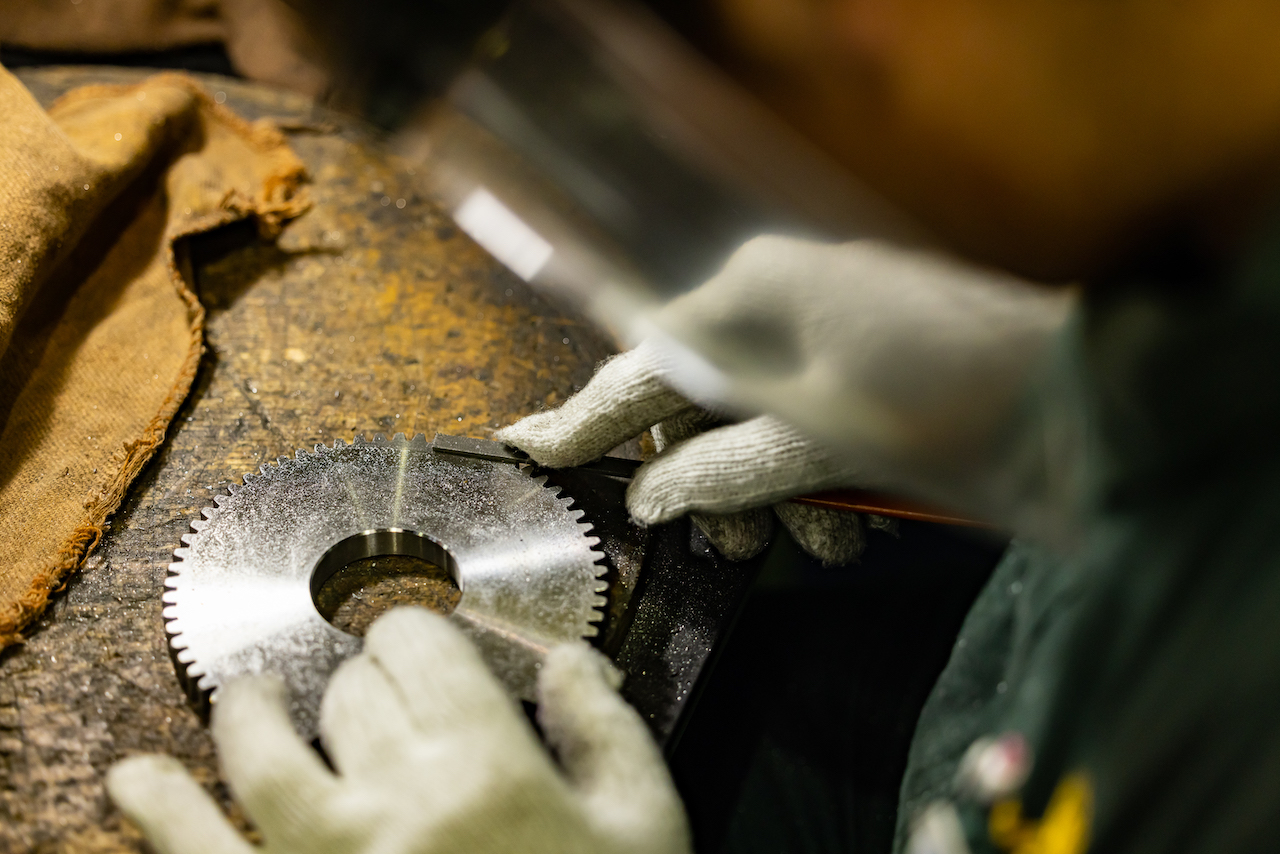 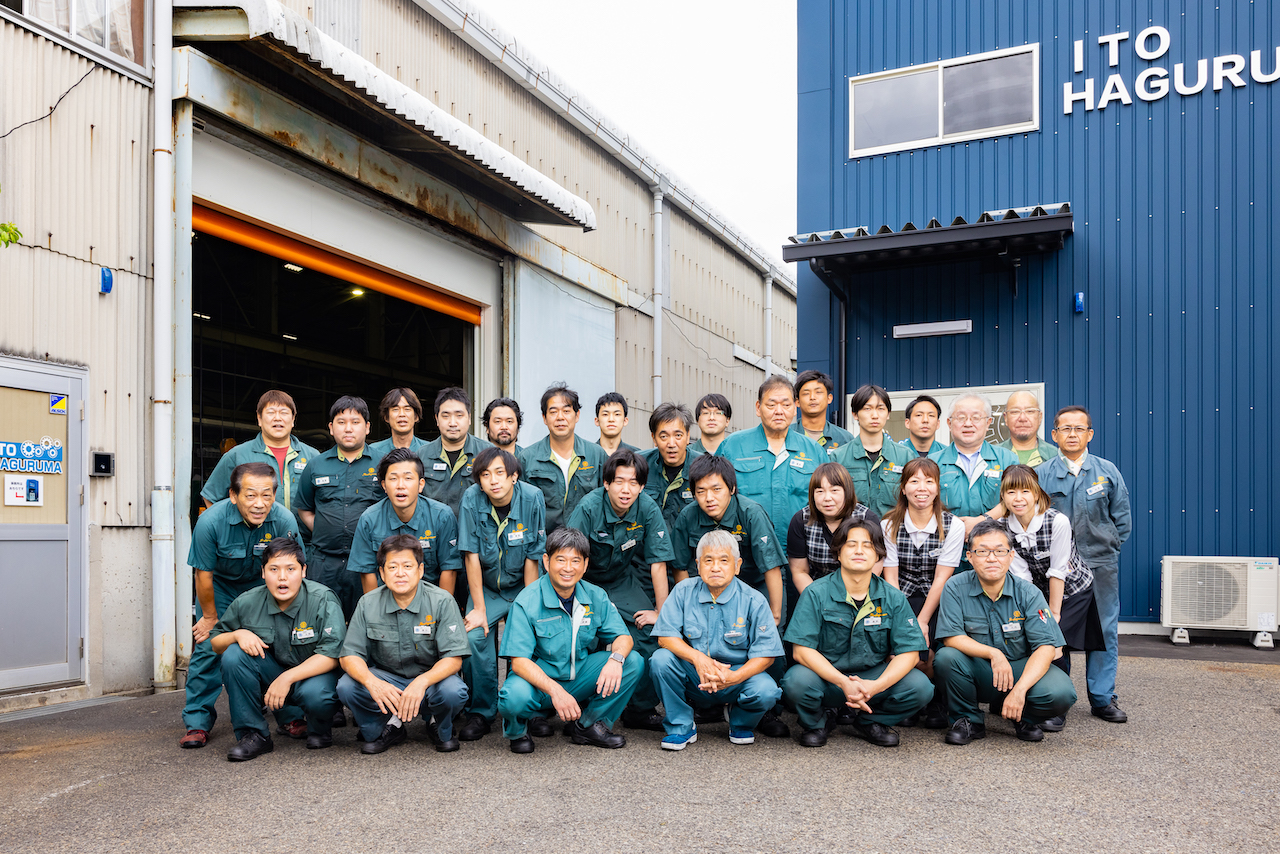 We supply gears to various industries, including equipment machinery, transportation equipment, machine tools, agricultural machinery, reduction gears, and pumps, with technical capabilities using the five senses. Our concept is based on the three “Manufacturing” aspects.
The first [manufacturing] indicates we do machining. We can process various types of gears, including gear cutting, gear grinding, lathing, milling, machining, and internal key machining.
The second [manufacturing] indicates we produce gears. We procure materials, manage the process with the help of outside suppliers, and manufacture and deliver the finished gear parts.
The third [manufacturing] indicates we reproduce gears. We can take sketches of broken gears or those without drawings, calculate the shape of the gears, and manufacture the same piece.

We are able to do this because of the experience we have accumulated over the 70 years since our company was founded.

Our company is located in Kishiwada, where there is a festival called Danjiri Matsuri in the southern part of Osaka, close to Kansai International Airport. In 1951, my grandfather, the founder of the company, established a gear factory here in Kishiwada.

At that time, the company processed gears as parts of specialized machines for machinery manufacturers of spinning and weaving, which was a local industry in the Senshu area. In 1957, the company was incorporated, and in 1980, it moved to its current location in the Kishiwada Industrial Center, Isonokami-cho, Kishiwada City.

Later, as times changed, the company introduced various types of machining equipment and shifted its focus from gear cutting and other partial machining work, which had been the mainstream up until then, to gear manufacturing as a component with process control in whole material machining.

After the collapse of Lehman Brothers in 2008, we started hiring new graduates with an eye on the future, and now half of our employees are young people.

On the 3S activity day held once a month, employees take the initiative in company improvement activities, and through these activities, we are working to pass on skills from veterans to younger employees and across the boundaries of each machining process group.

As a company that manufactures gears, which mesh with each other, we would like to promote the creation of a ” lively company powered by everyone’s efforts” as stated in our management philosophy, and create gears that move the world with the goal of “enriching the lives” of everyone in the world, including ourselves.

We will promote sustainable development (going concern) in the spirit of Sampo Yoshi (employee/company, customer, and society).

We aim to be a vibrant company that cares for each other and is driven by the efforts of all.

We enrich people’s lives with our solid technical capabilities through gears.